It's been a great week, but I've been ready for the beach the entire week! 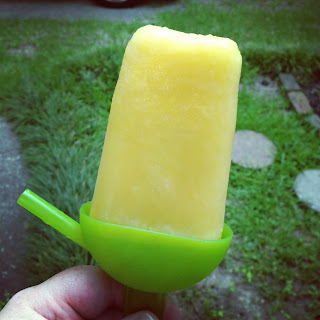 This has been the first week for me that I feel like it's just been unbearably HOT. Homemade popsicles are still high on the list. I got some new molds in this week that I can't wait to try when we get back from the beach!

Last weekend, Paul and I decided to have an adventure to check out a place I had never been before, but Paul had been many times growing up - Jerry's- a catfish house on 49 that's shaped like an igloo. I just had to see what he was talking about. 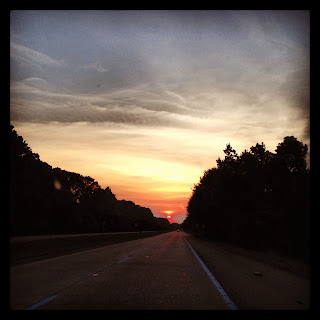 Surprisingly, it's HUGE on the inside and it had the best catfish I've ever eaten. Truth be told, we're going back again tonight! I worked an admissions event at work today and they had catfish for lunch. I told Paul I had to have catfish for dinner. It's hard to photograph and not eat it! 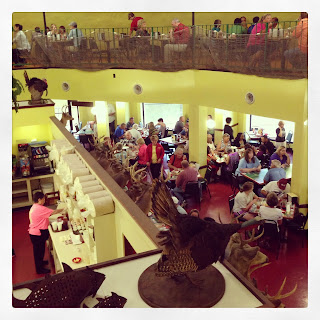 Salmon has been on our plates this week. There's nothing better than a good, grilled piece of salmon (with brown rice and extra thin green beans). 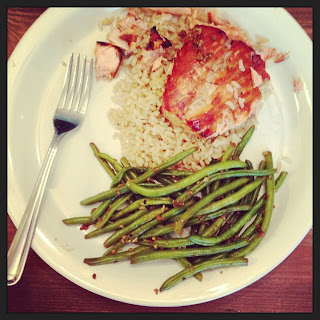 There's also been a big theme of tomatoes, Chilton County peaches, and blueberries this week, too. Peaches are just now getting good, so I can't wait to eat them while we're at the beach. 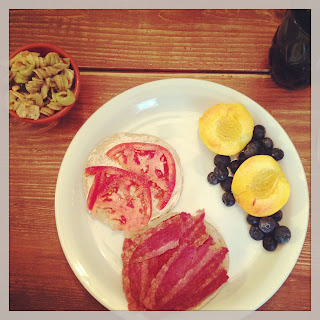 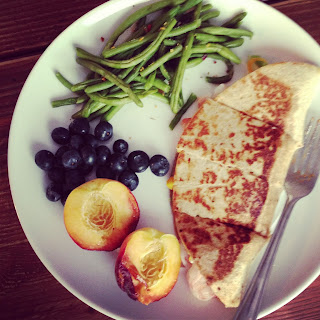 We got to do some celebrating this week because we found the deal of the century on... wait for it... a washer and dryer. I know, you're all so excited as we are. Funny enough, I get emails about deals from Home Depot and saw an LG front loading washer and dryer for $400 less than usual (we had been ready to pay full price for them). Since we knew that they had them at Home Depot, we decided to go see what Lowe's had competition-wise. We found the exact same set at the same discounted price plus free delivery and a $50 gift card. SOLD.

We celebrated with snow cones. 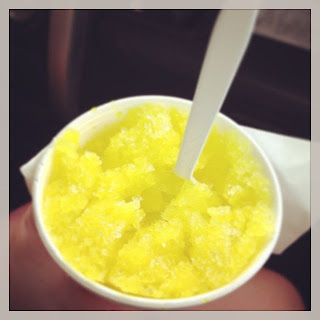 We got them this week and lucky for us, the delivery men even helped us move the old washer and dryer to another part of the garage (they came with the house, but are getting rusty - the reason we bought our own in the first place). 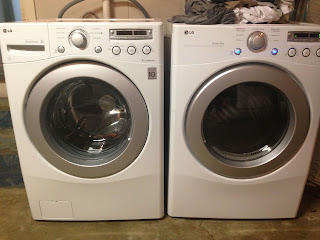 It cracks me up that instead of a start button, there's a play button. Instead of a buzzer, it plays a song at the end. You'd have thought we bought an iPod. These machines are very high efficiency and we find ourselves just watching them work.

Hope you guys are having a great week and see (some of you) at the beach!
Posted by Sophie Wolf at 4:06 PM 1 comment: Links to this post

Sorry it's taken to post again. I had all these plans for the blog and unexpectedly a very close family friend passed away and things went out the window (Click here to read the obituary I helped write). It's been a sad week, but a good week.

What I couldn't wait to tell you about was the new speakeasy down the road from us called Apothecary. While I could explain everything to you, I'll just let the article we wrote do the talking. I've already told Ashley and Bryan they have to check this out when they come to Jackson! 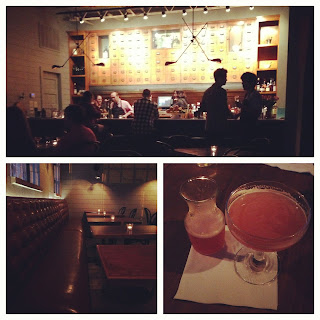 I've also gotten wildly into popsicles. This article has been a great source of inspiration. Thanks Pinterest! 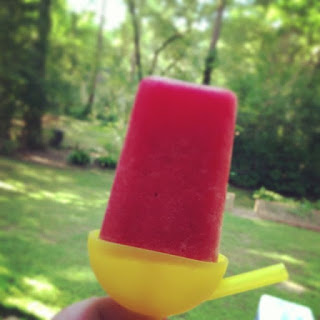 I've made healthy Nutella popsicles and, my favorite, ginger and peach. 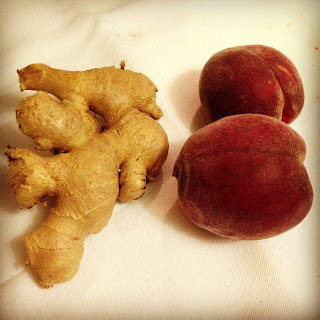 I picked up the peaches at a farmers market in Cooper Young while we were in Memphis. They aren't Chilton County peaches, but they were pretty good.

And, as luck would have it, we've found a cat to adopt. I saw a girl post on our neighborhood message board a week ago that they were having to relocate for their jobs and with a three month old baby, they just couldn't move the cat to Ohio. We went and looked at her last Wednesday and were so happy with her. They are keeping her until we get back from the beach and then she's ours. The family has been keeping us updated and the cat "sent us this picture to say 'hi'" the other day. So ready to have her! 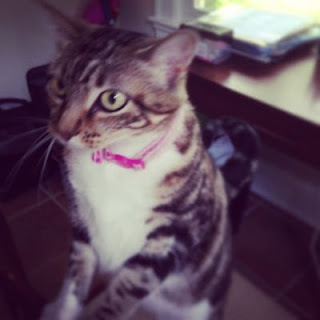 Hope you guys are having a great week!
Posted by Sophie Wolf at 8:09 PM 1 comment: Links to this post

We just came back from a great birthday trip in Memphis. We've been there a few times before, so we have our favorite places, but we wanted to branch out too and try some new spots. 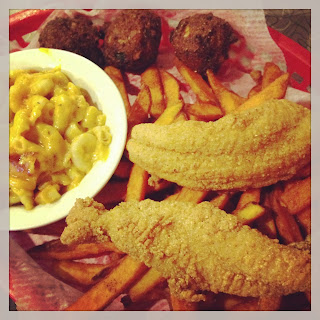 When we go to Memphis, it always seems like we end up at Soul Fish in Cooper Young. So good. I got the catfish basket with sweet potato fries, hush puppies, and mac and cheese. I didn't finish even half of this! 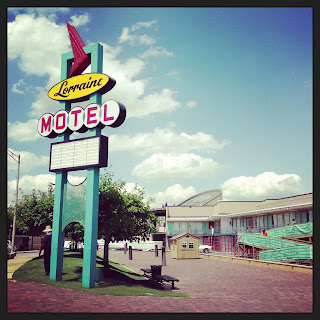 I had never been to the National Civil Rights Museum and knew that was something I wanted to do. 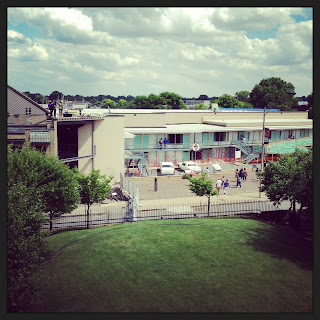 This is the view from a window ten feet to the right from where James Earl Ray shot Martin Luther King, Jr. from a hostel bathroom window towards the Lorraine Motel. Unbelievable.
After checking into our hotel, we started walking about Main Street and ended up at Slim's near the Peabody for happy hour. After a few drinks on the patio, we rode the riverwalk loop of the trolley.

Later that night, we ended up at a tasty gastropub called Local. Great food. 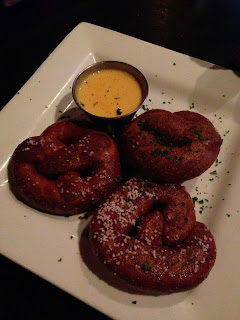 The highlight was probably these pretzels and cheese sauce. The sauce wasn't thick and the pretzels had the perfect amount of salt. 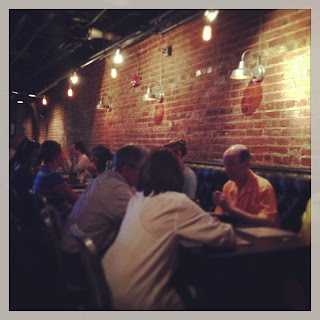 Great atmosphere. I ended up with a Lobster BLT, but was full by then and ate the bacon and lobster off the sandwich! 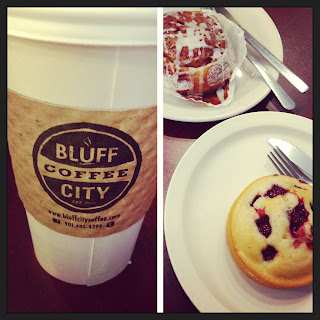 I've heard awesome things about Bluff City Coffee and have passed by it on the trolley loop several times now. The owner is a pastry chef and he's renowned for his baked goods. He definitely didn't disappoint. We tried a cherry yogurt roll (which almost tasted like cobbler) and an orange cinnamon roll. Very tasty!

We headed back to Cooper Young and stopped at their community farmers market for peaches. I wish I had a photo of where we went next - a fair trade store inside a church. UCC in denomination, this church has opened their doors to the community to fill the giant building. The church has a community bike shop, yoga classes, home birth midwives, dance classes, and the fair trade store, among others. I bought some really cool pieces there. I think my favorite part about this church is the sign that says "We teach acceptance, forgiveness and bike repair." 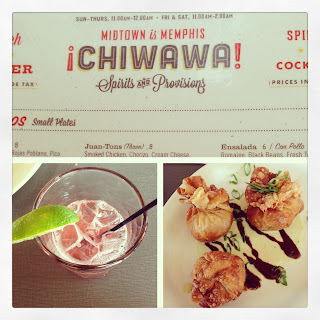 After looking around some shops, we headed to Overton Square in Midtown (Cooper Young is part of a greater Midtown area) and found ourselves at Chiwawa. We tried Juan-Tons and split a foot long corn dog, one of their specialties. 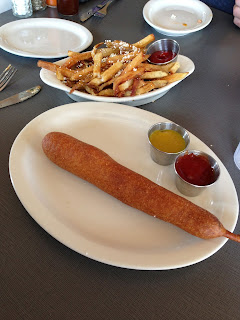 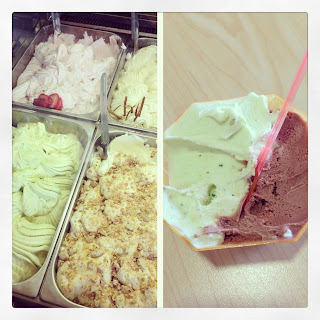 Then, we headed back to Jackson. I have to say, while I love and appreciate Memphis, there's no place like home! We had some good times that night back here in the neighborhood. More on that in the next post!
Posted by Sophie Wolf at 8:51 AM 1 comment: Links to this post

Enough of you have asked and I've finally found the time to do a tour of our house! 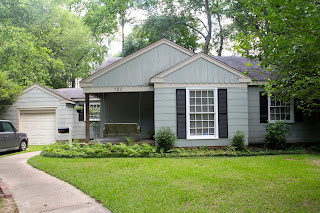 I can't tell you how much we love this house!

What you don't see is the third bedroom, which doubles as Paul's office. He was working in there (magazine goes to press in a few days) and it's seen cleaner days. We'll show it to you in another post. Hope you guys enjoy!
Posted by Sophie Wolf at 12:17 PM 6 comments: Links to this post